A Look at Lakota's History 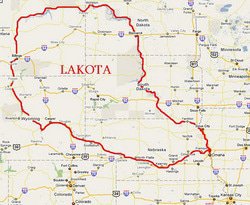 The Lakota Indians have had a strong presence in the US for hundreds of years and over the course of time, more members have joined and the culture remains a focal point of the tribe. With an interesting history, the tribe has been relocated due to wars and land issues, but many members are still active today and can be found on various Reservations throughout Nebraska and the Dakotas.

The Lakota tribe first settled in Minnesota when the Europeans began to explore the land in the early 1600s. The tribe relied on small deer, game and wild rice and they were always contending with larger rival tribes. There was a major conflict with an enemy tribe, the Ojibwa, which caused the Lakota tribe to eventually move to the west. In the 1770s, Lakota Sioux tribe members acquired horses and learned how to hunt buffalo on the plains of the Dakotas, Wisconsin and even in areas of Canada. The Lakota Sioux history is one that is long and string., The tribe has always been known for their intense warrior culture, and there were seven bands of Lakota Sioux, including:

Also known as the Dwellers on the Plains, the Lakota tribe was one of the main opponents of the United States Army during the Sioux Wars.

Where Lakota Indians are Now Today, members of the Lakota tribe are found on five main reservations in South Dakota. These include the Rosebud Indian Reservation, Pine Ridge Indian Reservation, Lower Brule Indian Reservation, Cheyenne River Indian Reservation and Standing Rock Indian Reservation. There are also Lakota Indians residing in northern Montana and North Dakota. A large amount of Lakota also live in Rapid City and various small towns in the Black Hills. While the number of Lakota Indians is not as high as with other tribal groups, they still have a strong presence and there are about 70,000 registered Lakota members. Unfortunately, less than half of these speak the traditional Lakota language, though they do adhere to customers and respect the historic culture of the tribe. For those that reside on Reservations in the US, there are set laws that are set forth by the tribal group. They have a separate police department, political system and even a different education system.

The Lakota culture is quite rich and one of the most important aspects of the culture is the oral tradition. With this, knowledge has been passed through many generations and elders as well as tribal leaders told the history of the tribe orally. Religion and spirituality also play a large role in the culture of the Lakota Sioux tribe and there are still sacred ceremonies that are conducted. One of the most important ceremonies is the Sundance, when many tribe members would gather in a large camp and dancers would pierce their bodies as a self-sacrifice. These were done in order to bring balance to the people and honor the creator. In terms of language, the Lakota language is a Siouan language that is spoken by many tribe members, even today. The language represents one of the largest speech communities in the country and almost 2,000 tribe members living on the plains still speak the language.